B-boying's Most Well-Known Competitions and Events 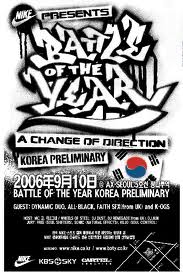 1.Battle of The Year (BOTY):The Battle of The Year,commonly known as the BOTY is a competition that began in 1999.Various crews representing their home countries from all over the world gather at the venue,which is set in Germany (and in France in the 2010 BOTY Finals),to square off against each other and prove which crew was the best in the world.Participating crews are determined through preliminary rounds set in places all over the world.It was made first and foremost to break the barriers between nations in the art of B-boying.It is considered as the most popular competition in the world of B-boy and is usually referred to as the "World Cup of B-Boy" or the "Olympics of B-Boy".

2..Red Bull BC One:Another famous B-boy competition is the Red Bull BC One competition-organized by the drink company Red Bull.Unlike BOTY,individual B-boys and not crews are called to participate in this competition.Preliminaries determine those who would participate,and only 16 of the world's top B-boys make it into the finals,set in a different place and country every year.These 16 will square off on the dance floor in a set of one-on-one battles,judges by a panel of 5 judges,and the winner will be known as "The Best B-boy of the Year."This competition is also very known,having an iPhone game made based on it and having various soundtracks released containing the songs played in the competition.


3.R16 Korea:Another well known B-boy competition,the Respect16  Korea is a competition which combines the elements of the Red Bull BC and the BOTY.It is held in the form of a 2-day festival which features Streetwear,Graffiti,and other elements of Hip-Hop culture.The festival is usually set in different cities all over South Korea,where 15 top-ranking crews gather from all over the world to compete in B-boy battles and determine who among them is the greatest.Like The BOTY and Red Bull BC,R16 is also a well-known and often visited competition in the B-boy scene.

These are some of the most famous B-boy competitions out there,and the presence of these competitions show that B-boy is not only a dance,it is also a sport,and a very interesting one at that.